Ordering to the UK? Read this!

We are shipping to the UK in cooperation with UPS. All orders over 135 euros to the UK will be imposed with customs fees by the HRMC upon arrival. We are therefore recommending that customers from the UK place orders under 135 euros for the time being, i.e. monthly or three-month subscriptions.

Baricol / News Archive / Why do hunger and satiety change after Bariatric surgery?
Previous article
Next article

The main reason is that while the size of your new stomach plays a role in how hungry and full you feel, it’s not the star of the show.  Instead, just like mood, sleep, heart rate, reproduction, and more, hormones take the lead in determining how full and hungry you feel. Changes in these hormones after surgery differ from person to person, as we talked about in our article about factors other than behaviors that influence your weight after WLS.  The hormonal changes are a bit complex, so we’ll touch on the basics here and point you to where you can find out more.

Ghrelin is the hormone that our bodies make to tell our brains that we’re hungry, and it’s often the one that gets talked about the most as a mechanism for weight loss after WLS. Ghrelin is produced in the stomach and stimulates hunger, fat deposition, and the release of growth hormone, among other things. With both the gastric bypass and gastric sleeve, reducing the size of the stomach also reduces the amount of ghrelin thus reducing hunger.  During weight loss without surgery, the body produces more ghrelin to try to prevent weight loss. By reducing ghrelin, the surgery overrides the body’s desire to keep weight on. Much like before surgery, ghrelin levels and hunger will still vary from person to person after surgery.  This is also true for the factors that lead to satiety.

By having a small pouch for a stomach, food enters your intestine pretty quickly after WLS. This causes your body to produce an exaggerated amount of hormones from your gut that make you feel full.  One of these hormones is glucagon-like peptide-1 (GLP-1).  For people that don’t have the expected response to bariatric surgery and still feel hunger, there is research into using medications involving GLP-1 to improve satiety and weight loss.

Another hormone involved in satiety is leptin.  Leptin tells your brain that you’re full, but some people don’t produce enough of it.  Also, many people that have obesity have developed a resistance to it, so even if the body makes enough, the signal isn’t getting to the brain.  Thinking you haven’t eaten, the body then produces more ghrelin to tell you to eat more.  But after WLS, the body produces more leptin than it did before which is great if you don’t have resistance to it.  If you do have resistance,  having less ghrelin after surgery means that you can override the leptin resistance.

There is much more involved in hunger, satiety, and even the food you crave after WLS, and researchers still don’t fully understand a lot of it.  If you like the science and biology of what’s happening in your body, check out the Food Intake and Eating Behaviour after Bariatric Surgery article from 2018.  It discusses the interactions of the different changes in your body that promote weight loss after bariatric surgery.  Like we said before, it’s about far more than just a smaller stomach. 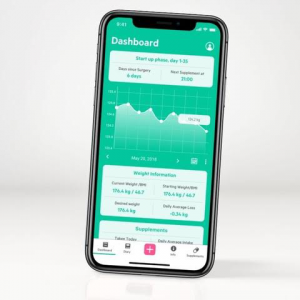 We are more than just vitamins and minerals after WLS. Recommended by healthcare professionals!

This website uses cookies to improve your experience while you navigate through the website. Out of these, the cookies that are categorized as necessary are stored on your browser as they are essential for the working of basic functionalities of the website. We also use third-party cookies that help us analyze and understand how you use this website. These cookies will be stored in your browser only with your consent. You also have the option to opt-out of these cookies. But opting out of some of these cookies may affect your browsing experience.
Necessary Always Enabled

Performance cookies are used to understand and analyze the key performance indexes of the website which helps in delivering a better user experience for the visitors.

Analytical cookies are used to understand how visitors interact with the website. These cookies help provide information on metrics the number of visitors, bounce rate, traffic source, etc.

Advertisement cookies are used to provide visitors with relevant ads and marketing campaigns. These cookies track visitors across websites and collect information to provide customized ads.

Other uncategorized cookies are those that are being analyzed and have not been classified into a category as yet.